How many Lake Billy Chinook kokanee spawned in the Metolius River in 2016?

How many Lake Billy Chinook kokanee spawned in the Metolius River during fall 2016? 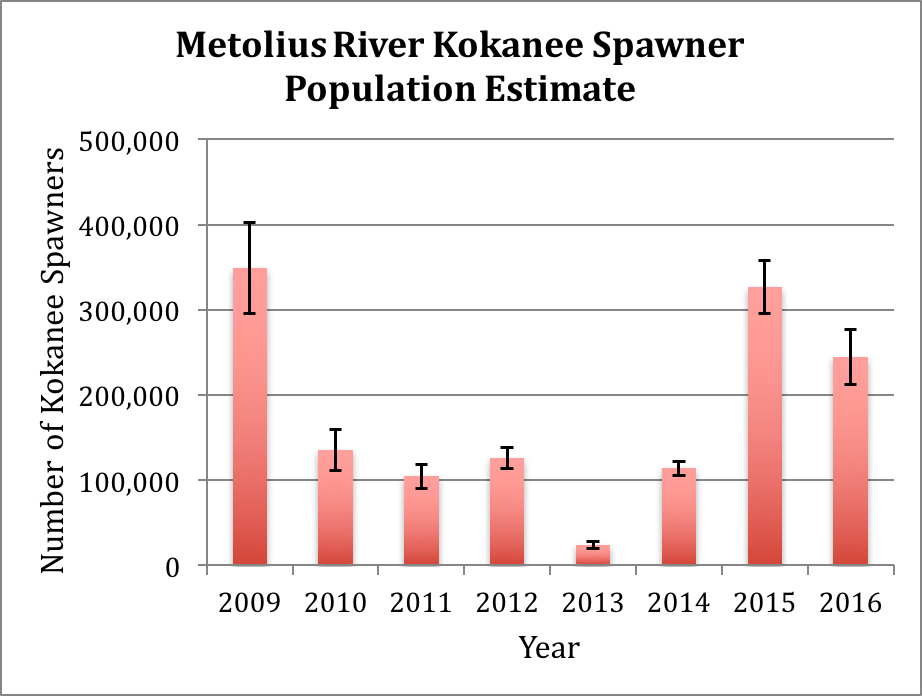 The chart above shows the estimated number of Lake Billy Chinook kokanee that have spawned in the Metolius River and its tributaries since 2009.  Each year’s estimate was determined using the mark-recapture study method. As you see the numbers can vary a lot, which is common among kokanee populations everywhere.  The error bar for each year’s estimate shows the 95% confidence interval for that estimate.  In other words, we are 95% sure that the estimate is in the range of numbers represented by the error bar.  For example, 2016 kokanee spawner chart estimate is 244,540 plus or minus 32,389 kokanee.  Therefore, we estimate that 212,151 to 276,929 kokanee spawned in 2016.

Every year from August through October, fisheries department personnel from the Confederated Tribes of the Warm Springs Reservation (CTWS), the Oregon Department of Fish and Wildlife (ODFW) and Portland General Electric (PGE) work together to estimate the number of Lake Billy Chinook kokanee that spawn in the Metolius River and it’s tributaries.  To do so, a mark-recapture study is conducted.  Such studies are commonly used in ecology to estimate the number of individuals in a given animal population.  Every August 3,000 kokanee are captured in a 300 foot-long beach seining net from Lake Billy Chinook and marked with two orange tags (see photographs) and released immediately back into the lake.  If you catch a tagged kokanee during your fishing trip, they may be harvested and counted toward a legal catch limit, and no reward is being offered for the return of these tagged fish.

Each September tagged and untagged kokanee swim from the lake into the Metolius River and spawn during the month of October.  In October, fisheries department personnel walk the riverbanks and count spawning kokanee with tags (marked) and without tags (unmarked).  The ratio of marked fish to unmarked fish during October counts should be proportional to the ratio of fish marked in August (3,000) to fish in the whole population.

We would like to thank everyone who participated in the kokanee tagging project including our project collaborators PGE and ODFW.  In addition to personnel from these collaborating agencies, participants included people from CTWS Summer Youth group, CTWS Branch of Natural Resources, and the Northwest Power Conservation Council (NWPCC).